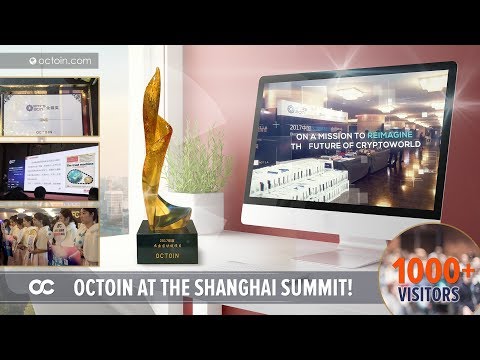 Octoin was called the most outstanding blockchain project in China! On December 21, 2017

Octoin became the prize-holder of “Gold chain” after winning in the nomination “Outstanding blockchain project”. Congratulations to our Chinese Leaders of Octoin who represented our project in China! Their award is well deserved.

Thanks to their enthusiasm and effective work Octoin has reached the appropriate attention of the users all over China. As a result it became mega popular not only in this country but around the world.

China Blockchain Technology Application Summit is a large-scale event which gathers annually the top specialists in blockchain and FinTech technologies from all over the world. This year in Shanghai Crowne Plaza Hotel have gathered over 1000 representatives of the companies, which use the blockchain technologies in the finances, cybersecurity, education, cloud storage, energy resource management etc.

Octoin is an international financial organisation, working at the cryptocurrencies market. First pool of OCC released to the market during the autumn of 2017 have created a real success among the investors around the world. OCC is actively purchased in China, United Arab Emirates, Indonesia, India, Africa, Europe, USA.

Earlier Octoin have announces that it is getting ready for releasing OCC to the exchangers. OCC will have PoS mining algorithm. Proof of Stake (PoS) is an algorithm which is used in the new generation of the cryptocurrencies. The competitive advantage of PoS is that instead of using the huge computing power for the mining now the user can have some large share in the system itself. The reward will be in direct proportion to the share size.